One of the youngest participants on D-Day was James Radford aged just 15 years old who served on the tug Empire Larch as a galley boy. His first voyage was from Poole to the Normandy coast where they came under heavy bombardment, whilst towing block ships into place, for the construction of the vital Mulberry harbours.This saved countless lives as it meant the allies didn't need to capture a harbour to secure critical supplies for the invasion forces. His song recalling the events of that fateful day, is titled, Shores of Normandy. Jim himself performed the song, as part of the Royal British Legion Festival of Remembrance 2014

Shores of Normandy
In the cold grey light, on the 6th of June, in the year of 44,
The Empire Larch, sailed out from Poole, to join with thousands more,
The largest fleet, the world had seen, we sailed in close array,
And we set our course, for Normandy, at the dawning of the day,

There was not one man, in all our crew, that knew what lay in store,
Well we had waited for that day, through 5 long years of war,
We knew that many, would not return, but all our hearts were true
For we were bound, for Normandy, where we had a job to do,

Now the Empire Larch, was a deep sea tug, with a crew of 33.
And I was just, a galley boy, on my first trip to sea
I little thought, when I left home, all the dreadful sights i’d see,
But I came to manhood, on the day, when I first saw Normandy

At Aramanche, off the beach called Gold, neath the rockets deadly glare
We towed our Blockships, into place, and we built a harbour there
Mid shot and shell, we built it well, as history does agree
While brave men died, in the swirling tide, On the shores of Normandy

For every heroes, name that’s known, a thousand died as well
On stakes and wires their bodies hung, wrapped in the ocean swell
And many a mother, wept that day, for the sons they loved so well
Men who cracked a joke, or caged a smoke, as they stormed the gates of hell

As the years pass by, I can still recall, the men I saw that day
Who died upon, that blood soaked sand. where now sweet children play
And those of you, who were unborn, who’ve lived in liberty
Remember those, who made it so, on the Shores of Normandy

Posted by UlsterScot at Sunday, November 09, 2014 No comments: 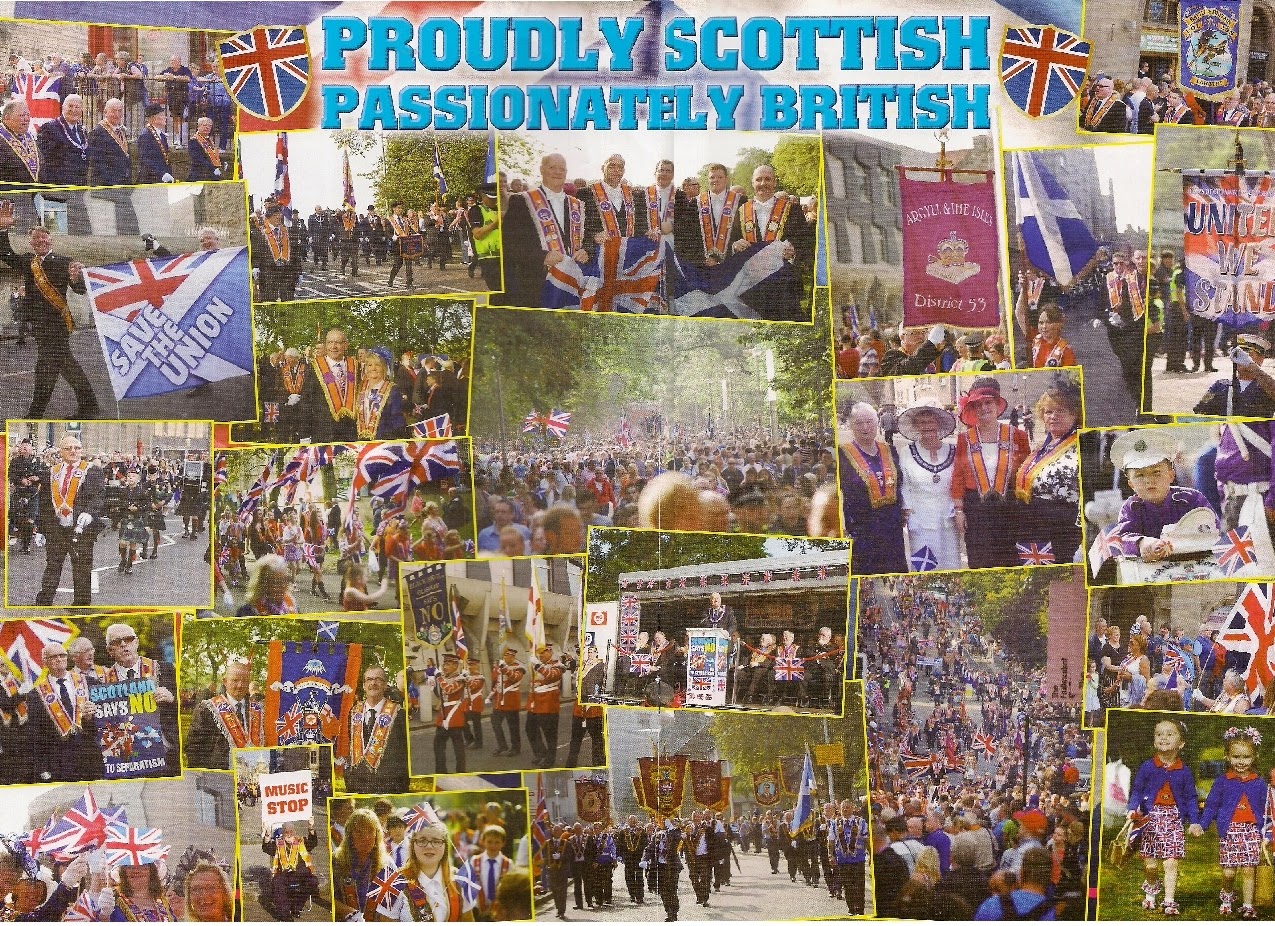 Part of the Union
Written by Wor Bro Bobby Parks

In the UK we are strong,
Share history that's long,
Standing side by side, we've fought with pride,
To split apart's plain wrong.
With Georgies, Brummies, Taffs,
We Jocks have lots of laughs,
And when the ferry docks at Lame
The fun goes off the graph!

Eck's gambling that some oil,
Will keep things on the boil,
But where's his loot when the oil runs oot,
And the banks are in the toils?
He feeds us fudge, not facts,
Plots sly behind our backs,
And Swinney just won't say if he's
Got plans for higher tax!

The SNP smokescreen
Pretends to want the Queen,
But Salmond's bent on President,
A republican regime.
With the Union we will stand,
Four nations, hand in hand,
With one big voice, we have the choice
To make the UK grand!

(chorus)
Posted by UlsterScot at Friday, October 03, 2014 No comments:


Come all you noted warriors, where ever that you be
And give your kind attention and listen unto me
While I relate the Glorious Charge, with honour I will try
It was done by Ulster’s Loyal Sons, on the first day of July

2/ The shot and shell, screamed o’er the dell, the woodland rang with sound
With courage strong, they did march on, across the blood stained ground
Where foemen lay in thousands, awaiting the attack
Concealed from view in dug-out deep, their treacherous plans they wrought

3/ Twas on the 24th of June, our guns commenced to play,
For six long days and nights they boomed, in Battles wild array
Our men stood out like lions stout, their thoughts they raised on high
To cheer them on to Victory, "NO SURRENDER!" was their cry

4/ Two Brigades they took the front, it a glorious sight
Reinforced by the Brigade of Belfast Boys, whose courage well was tried
They got the signal to advance, they willingly obeyed
The Huns they tried to stop them, but they were soon dismayed

5/ But on they charged though many fell, until they reached their goal
They gave the Huns to understand, there was a marrow in their bone
They made them cry for mercy and also rue the day
They tried to conquer Europe, and make old Britain slaves

6/ The best troops of their army, from Verdun they were drawn
To hold the line at any cost, against our wall of steel
But Oh alas they were deceived, when we did on them fall
And took six hundred prisoners, and nobly held the field

7/ The battle being over, next day was fair and bright
We got relieved by comrades, who with us did unite
To raise our hearts to God above, who brought us through the fray
To hoist the flag of freedom, whose honour lasts for age

8/ Our General did address us, and unto us did say
I’m proud of you my Ulster Boys, you have nobly won the day
Your names in history will be read, by ages yet unborn
Of  the deeds you’ve done and victory won, on July the 1st Amen

9/ And now the end these simple lines, that I have now penned down
Do not mourn for Heroes gone, who answered duty’s call
Drink to their Glorious memory and pride in what they have done
On the banks of the River Ancre, in the Valley of the Somme


The copy of the document I saw containing this poem was in several places illegible so I placed ? at those parts I am not certain about.

A copy of Sgt. McKnights original hand written manuscript can be viewed or downloded by clicking this link

Colour Sergeant William Thomas McKnight of Newry Street Kilkeel Co Down whose items were the source for this poem was killed a year after the Battle of the Somme  at Passchendaele on 16 August 1917, aged 36 and has no known grave. He was a member of Aughnahoory Heroes LOL no 343B & also Royal Black Preceptory Elijahs Chosen Few 208 both still active in his home town of Kilkeel Co Down in Ulster.

On the Road to Passchendaele - Song link


Posted by UlsterScot at Thursday, September 18, 2014 No comments:

A band of youthful heroes,
Within our Maiden Walls,
Once dar'd a tyrant’s mandates,
As history recalls;
Despising threats and shackles,
That would have seal'd their woes,
They thundered forth defiance
Against insulting foes.
Chorus:
Huzza, then, for the Crimson Flag,
That floated brisk and gay!
And wav'd defiance to the foes
Huzza! Huzza! Huzza!

2. A monarch once in martial mood
Our walls in state approach'd
Demanding entrance but he found
His presence had encroach'd ;
A burst repugnant to his ears
Saluted from within;
He wheel'd about, and fled through fear,
In spite of "shame or sin."
Chorus:

3. Away went James with whip and spur,
And foremost drove his steed,
Nor look'd behind but wistfully
Mountgavelin sought with speed;
To Dublin next he sped his way,
And sorely did he rue,
To Derry e'er he set his face,
Its "rebels to subdue."
Chorus:
4. A ruthless force surrounded had our city
Doom'd they thought;
But soon they found their false hopes
Had gained less than they sought;
A corps of dauntless heroes
Our sires in days of yore
Rush'd boldly out upon the foe,
And scorned the cannon's roar.
Chorus:

5. When gallant Browning led the van
Each pulse beat high with praise,
Rever’d the power that rul'd their fate
Their drooping hearts to raise;
Whilst famine, fever, raged within,
The savage hordes around
Foil'd took a hasty moonlight flight,
And left the tented ground.
Chorus:

6. Let tyrants rule with infamy,
And serfs and slaves trepan,
Religion, life and liberty
Are dear to every man;
Victoria reigns supreme with us
Let others dare say nay,
Who snarl and puff or proudly boast
Britiannia bears the sway.
Chorus:
Posted by UlsterScot at Tuesday, March 11, 2014 No comments:

I fought at land, I fought at sea
At hame I fought my auntie-o
But I met the Devil and Dundee
On the braes o' Killiecrankie-o